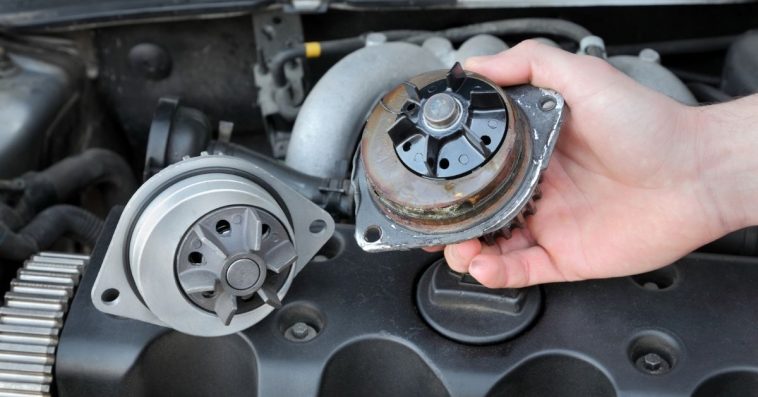 Have you ever noticed steam billowing from the front of your car when you come to a stop? It may be that your water pump is failing. Or it may be due to other problems leading to an overheated engine.

Unless you know how to watch out for signs of a bad water pump, you cannot make the right decision, which is rushing to your mechanic.

Your engine deals with a lot of pressure and heat when it operates. That, in addition to the hot summer sun, takes a toll on it, if not for the coolant which cools the engine down maintaining an optimum temperature.

Here are some common signs to watch out for in a bad water pump:

The water pump in modern cars is meant to last for a long time, but the years can take a toll and subject it to wear and tear.

If you know how to watch out for warning signs, you can save money on a lot of things, including the water pump and most importantly, the engine.

7 Symptoms Of A Failing Water Pump

A bad water pump leads to many issues, which all result in your engine overheating and warping.

To avoid these, you must ensure that it in working condition at all times. The best way to do that is to know all the signs of a failing water pump.

Here are the 7 signs that you should look out for if you have any doubts about your water pump.

1. Coolant Leaking In The Front Of The Car

One of the most prominent signs of a bad water pump is the leaking coolant indicated by a puddle of a green or orange fluid under your car near the front end.

This may be due to the faulty gaskets and seals, which has given up over time or faced extreme stress that caused it to give up.

Gaskets keep the coolant from leaking and enable them to flow freely. But when the water pump is about to give up, you can see leaks forming on the broken gaskets.

They happen to be at the front end of the car, and that’s where you will find the leak. It is easily distinguishable from the color of the coolant, which is either green or orange nowadays.

But if your coolant is of another color, you know what to look out for.

If it’s just a coolant leak from a water pump, your mechanic can fix it before it leads to more complicated issues, including failure.

Adding to this, a warning I usually give to my friends, any liquid leaking from your vehicle is usually not for good. Better take to a technician who can identify the issue for you.

2. Whining Noise Due To The Water Pump Pulley

Engine noises are a great indication that something is wrong within the car.

When things do not perform as they should or when the parts deteriorate, they create abnormal sounds that are easily distinguishable to the driver.

Usually, it is because it is very different from the typical sounds of a vehicle.

In the case of a water pump, we can hear a high pitched whining from the motor, which is due to a loose belt.

When the water pump assembly wears out, the pulley that operates the belt becomes loose and causes it to create a whining or buzzing sound as it moves along.

The sound may also be due to worn out bearing in the water pump, in which case you have no alternative but to replace it in its entirety.

This whining sound will increase in volume as you accelerate the car or when revving.

When the water pump does its job, your engine should perform at optimum temperature thanks to the coolant.

But if the pump fails, it will not be able to flow through the engine block, essentially overheating it.

If you do not handle the situation right away, issues like burnt pistons, blown head gaskets, or cracked cylinders heads will start to pop up. And that is just the start.

Overheating will cause the seals and impellers within the pump to shatter, causing the engine great harm. Modern cars have sensors built into them that lets you know when the engine overheats.

If your gauge repeatedly hits a high-temperature, it might not be a water pump issue.

4. Steam Coming Out Of The Engine Radiator

A high priority indicator of an overheated engine and a water pump failure is steam arising from the radiator when you are driving.

In such an instance, stop at the safest possible location and call your mechanic. Do not drive the car even to a repair shop but get it towed instead.

It is the coolant and water with the help of the water pump that enables your engine to stay cold.

As I mentioned earlier, if the water pump works as it should, it circulates coolant through the radiator, where it releases the heat.

If the pump does not work properly, it cannot do its job, and evaporation occurs. Or maybe that level of coolant is not sufficient for the engine.

5. Rust, Buildup, And Corrosion On The Pump Due To A Slow Coolant Leak

In some cases, the coolant might start to leak slowly, hence would not collect under the car like a typical leaking coolant.

But instead, look around the water pump, and you can see signs of pitting, rust, and cavitation.

Pitting is small holes in the surface of the water pump caused by corrosion.

On the other hand, cavitation is caused when the vapor bubbles in the coolant collapse with sufficient force to create cavities on the surface.

The gradual leaking also causes the coolant to build up inside the pump, which slows the cooling process. Incompatible coolant may also cause the pump surface to rust.

Devoid of the above, you might want to check for coolant trails traveling down the water pump. It then mixes with the dirt and other debris, creating gelatinous gunk around the pump.

Even if this doesn’t cause your water pump to fail in the near future, it will create a low coolant situation soon enough, and you will be dealing with an overheated engine.

While this is not an indicator of a bad water pump, you might want to get your coolant looked at the earliest.

A functional temperature gauge will show the normal temperature at all times except when the engine overheats, and it then moves accordingly.

A bad water pump can cause the temperature gauge to fluctuate and move from normal to hot and backward.

Fluctuating temperature gauge can also be due to radiator issues. You need to consult with a technician in both these cases.

7. Holes On The Water Pump

When your vehicle gets older, you can see signs of wear and tear in the engine, of which one is holes in the water pump, especially in the dry portion.

Water Pump And Its Significance

The water pump is one component of the engine whose function is not much visible but, in fact, is the heart of the cooling system.

It works to circulate the coolant through the radiator so that the heat is dissipated. Without this, the heat generated by the engine can cause it to overheat.

The water pump is a circular disc-like formation made of a combination of steel and aluminum. It is divided into chambers with a spindle-like structure in the middle.

You can find it in front of the engine and is connected to the radiator and the engine via a hose. The engine itself powers the water pump, which operates through a belt and pulley system.

How Does It Work?

It is driven by a centrifugal force that sends the coolant to the edges when it spins and also drawing the fluid from the center.

An inlet centered around the center replenishes it with the coolant returning from the radiator while the pump throws it again to the outside from where it enters the engine.

The path taken by the coolant is via the engine block and the cylinder head to the radiator and then finally to the pump again.

The impeller is one of the most crucial components of the water pump. It operates on a sealed bearing, and its job is to circulate the coolant through the car.

If bearing wears out, it means that the water pump is quickly nearing its end.

Tips To Extend The Life Of Your Water Pump

While your water pump is designed to be long-lasting, it can fail prematurely, especially if you do not care for your engine.

However, if you happen to catch a bad water pump in its early stage, you can follow the below measures to extend its life a little longer.

How Long Should A Water Pump Last?

Your water pump would last 100,000 miles or even longer. However, experts suggest you replace the water pump if you have to service the timing belt.

But, It is not a thing to worry about since these components are designed to last quite a long time.

How Much Does It Cost To Replace A Water Pump?

Replacing a water pump costs anywhere from $300 to $450 depending on the make and model of your vehicle.

For example, a four-cylinder costs about $700 to replace your water pump. The part itself is about $50 – $100, but the labor is an expensive component here.

Can I Drive A Car With A Bad Water Pump?

Even if possible to start your car and drive, it is not advisable to do so since it causes untold damages to the engine due to its inability to cool.

On the road, it can lead to engine failure, which means an expensive engine repair or even a new engine.

A water pump, though not as famous or as visual as other parts of the engine, is an integral component.

It works to circulate the coolant through the cooling system so as to cool the engine and prevent it from overheating. The pumps are meant to last a long time but can fail prematurely.

The water pump is a component that gives telltale signs long before a failure.

If you are careful and knowledgeable about the symptoms, you can get them repaired before the avalanche of issues start.

A bad water pump must be checked over by a mechanic, but if you are in a shortage of funds, you can follow a few simple steps to extend its life.

Start with a sealing liquid which seals the leaks and lubricating the bearing. My article also covers a few more questions you might have about the water pump and its failure. 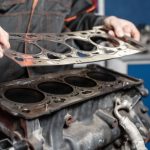 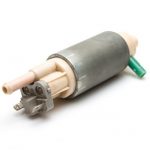